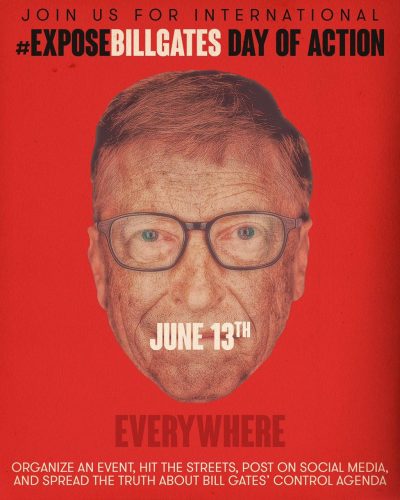 WHAT: A non-partisan coalition of alternative media organizations and activist groups are calling for a Global Day of Action to #ExposeBillGates and his control agenda.

In the first few months of 2020, billionaire Bill Gates has been promoted as the savior to the COVID-19 pandemic. Although he is lauded as a hero Gates has been a force of disruption and shaky science. The truth is Bill Gates hides a darker agenda.

Gates has made numerous media appearances calling for extended lock downs, contact tracing surveillance, digital certificates to travel and work, and announced his intention to vaccinate 7 billion people. Gates’ family also has ties to discredited eugenics science and believes billionaires like him should help reduce the world’s population. (For those who might be new to this information we recommend watching The Bill Gates documentary series from The Corbett Report and/or reading The Bill Gates investigation from The Last American Vagabond.)

It’s time to #ExposeBillGates and expose his agenda. Together we can shine the light on Gates’ true intentions and change the course of humanity.

WHEN: Join us on Saturday June 13, 2020 as we spread the word about Bill Gates’ agenda. We encourage everyone interested to organize and host documentary screenings, share articles, pass out flyers, drop banners, and share on social media using the hashtag #ExposeBillGates. We encourage everyone to share accurate and credible information about Gates’ goals. This is a non-partisan event and activists from all sides of the political spectrum are welcome.

To help spread the word about #ExposeBillGates Day please make this image your profile pic on all social media accounts. You can also download these flyers for sharing, editing, etc (1, 2, 3, 4, 5)

#ExposeBillGates Day is being organized by The Conscious Resistance Network, The Corbett Report, The Last American Vagabond, Activist Post, The Free Thought Project, The Anti Media, We Are Change, and Wake Up News. If you represent an alternative/independent media channel or website and would like to be involved please get in touch.